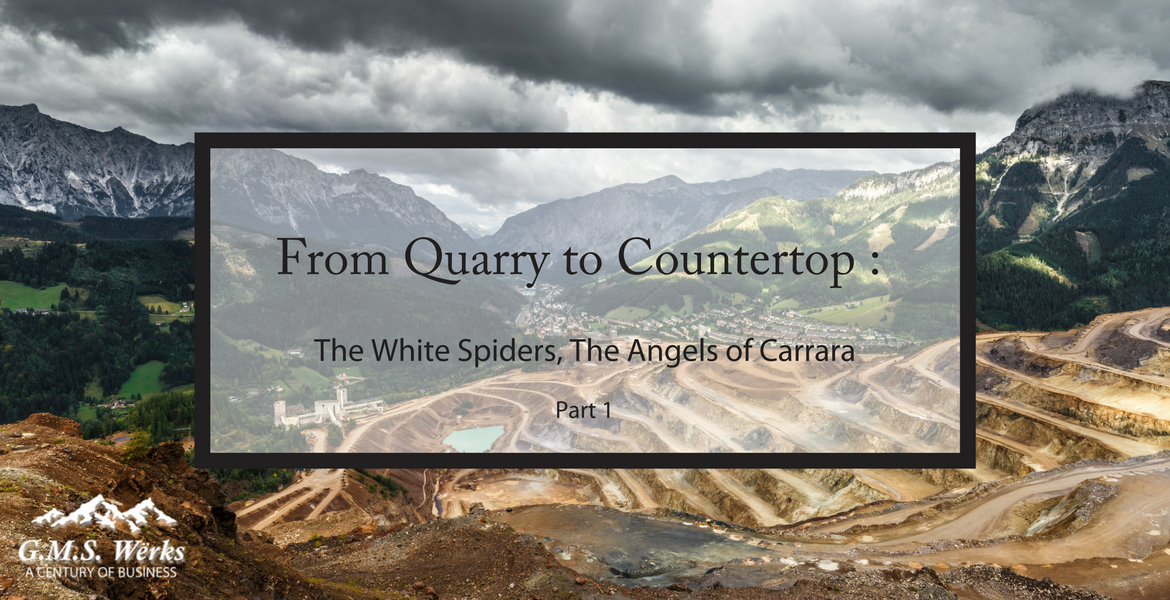 We’re often asked: “How do the workers in the quarries stay safe?” The answer lies with the brave climbers who work on the faces of the rock, chipping away unsafe portions and making sure the quarrymen working underneath them stay protected. These men are known as “The White Spiders,” “The Angels of Carrara,” or “Tecchiaiolo.”

Carrara marble is a specific type of white or blue-grey marble popular for use in sculpture and building decor. It is quarried in the city of Carrara in Tuscany. Carrara marble has been used since ancient Roman times. The Basilica of Massa is built entirely of Carrara marble and the old Ducal Palace of Massa was used as a showcase for carrara marble. Luca Galassi created a documentary that follows the “White Spiders,” who are also known as “The Angels of Carrara” and “Tecchiaiolo,” as they climb to protect the Carrara quarry workers from danger.

They can be hard to spot against the glaring, shimmery white face of the mountain and quarry wall, but if you look closely, you can see them, dangling from their ropes and working on the rock. In Galassi’s own words:

“Hanging on a rope, in perpetual suspension on the white marble faces of the Apuan Alps in Tuscany, the ‘white spiders’ are the guardian angels of the quarrymen. They work in the most extreme conditions, cleaning & monitoring the rocky faces with ancient tools to check the stability of the face and to edge out boulders and plates impending on the working yards down below. In the majestic scenery of Carrara marble quarries, natural amphitheaters facing the Ligurian Sea, the Tecchiaiolo is the humble and skillful inheritor of an ancient craftmanship. He performs a task that wears out, hardens, consumes. He carries out a profession whose daily confrontation with risk, fatigue, and sometimes fear, is unescapable.”

These men, whether seen as spiders or guardian angels, spend half of their day suspended in the air, removing small boulders and fragments from the face of the quarries. They use meticulous precision to remove these imperfections, using a tool called a “paletto” (much like a large chisel) and a steel hammer.

Because of this, the Tecchiaiolo are responsible for and take great pride in protecting the lives of the quarrymen who work below them. In one Tecchiaiolo’s own words: “The margin of error of our job is basically zero. We can’t make mistakes.”